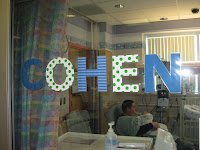 Cohen had a much better night last night. Justin and I came early this morning to try and be here for the doctors rounds. We got here about 2 minutes before they showed up. I wanted to hear from them about all the bloodwork and urine samples they took the day before. Friday night he had 6 back to back spells, so they were testing him for RSV and other things. It all came back negative. For now we are assuming the spells are caused by either reflux or secretions in his throat.  I am thankful last night was better, no spells at all.
Justin and I almost called Baptist this morning to try and have Cohen transported back. I have been somewhat frustrated by his nursing care  since we have been here. At Baptist, he has always had his temp. checked and diaper changed every 3 hours when he was fed.  He also has always gotten a water bath every night and a soap bath every 4 or 5 nights. His bed was changed at least every couple of days.
Now that he is here and on continuous feeds they don't have to be in his room as much, so I think some things have fallen to the wayside. He hadn't had a bath since he's been here. He also had not had his bed changed until yesterday when I did it.I have really felt like he is getting lost on the shuffle. They have over 400 NICU nurses here, so the chances of someone taking a personal interest are less. Bigger is better in some ways, but definitely not in all.
All that said, we have a WONDERFUL nurse today. By the time we got here she had everything organized and a bathtub ready, without me having to say anything.  The bad thing is she only works every other weekend! I am just praying God will place a primary nurse for Cohen in our path. That we can feel more secure while we can't be with him.  Leaving him has always been hard, but I think all this is making it worse.
Justin and I are focusing on the positive, and trying not to get overly stressed about other things. Thank you all for the continued love, prayers and support.
Posted by Christin at 10:28 AM