We have hoped all along Cohen's stay would be under 100 days. I don't know why, I guess 100 days just seems so much longer that 90 something!

After lots of consulting with doctors, nurses, speech therapists and anyone else that would talk to us,  we have decided to go ahead with the surgery for Cohen. It has been a tough decision, but I do feel like we have waited  an ample amount of time and tried everything they have available. The estimate if we don't do the surgery is 6 more months in the NICU. Then there is no guarantee that he will be healed. I just can't imagine him staying here until he is 9 or 10 months old. More than one doctor told us we would be "insane" not to do the surgery.  I do feel a small amount of  defeat and disappointment that this is where we have ended up.  As you know, we really believed Cohen would outgrow this by his due date and this would not be a choice we had to make. But----this is where we are. We are moving forward and being as positive as we can!

The G tube/ fundiplication/nissen surgery is set for this Thursday. They will also circumcise Cohen and the ENT doctor will do a  repeat bronchostomy while they have him sedated. It's alot for a little bitty bundle! Our neonatologist said he will go home next Tuesday, barring any complications. THAT IS A WEEK FROM TODAY!!!!

Now, that day may change, based on what happens and getting all the home health supplies, CPR training, car seat checks done. But none the less, I am thrilled to have an actual time frame to take him home! I can't wait to have everyone together finally!

In the meantime we are just hanging out holding and loving on Cohen as much as we can. We know we won't be able to for a day or two after the surgery.

We do ask for your continued prayers in the next few days. We are a nervous wreck about the surgery, even though we think it is the right move for Cohen.

Here is a pic of Cohen and Justin hanging out this morning. If I had waited 2 minutes, the picture would have been BOTH of them sleeping! 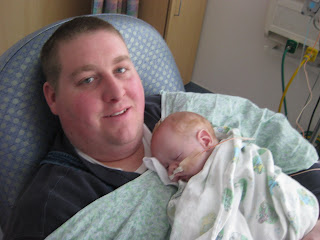