7 days after surgery I feel like we are starting to see glimpses of our boy again. During the day he has several happy hours of play, on and off. Then at night it seems to turn all "off". He is miserable to say the least. I can only imagine how hard it is to get comfortable with those big heavy casts on.

We are trying to keep him cool and dry, so he will itch as little as possible. He continues to run some low grade temps every day or two, which is still a mystery. The surgeon's office said unless the really high it may just be a coincidence. I do feel like he has a little cold to go along with this.

All that said, our sweet church family sent a balloon bouquet to Cohen. It has provided Cohen and Ames hours upon hours of laughing and playing. It's like their own little mini carnival. It has been the perfect distraction!!!

I snapped a few pics of them playing....BTW, I never leave them unattended with the balloons, I know they could easily get tangled up=)

Posted by Christin at 4:10 PM No comments:

Sorry for the delayed post! Seems like once you bring them home there is much less computer time=)

He is doing so much better. Still having a little pain (we think) and getting used to these monster cast. He also spiked a fever in the night last night and freaked us out some. We will probably have the doctor look at him to make sure we aren't having a start of infection or anything else.

I will post some pics soon! Thank you all for the support and love! We are so grateful to you all. Now, if we can all just get some sleep=)

BTW-----Calee left at 7 am this morning for 4-H camp. I will miss her so much this week and so will the boys. Say an extra prayer for her safety and that she has a blessed and wonderful experience! Thanks again.
Posted by Christin at 10:06 AM No comments:

Cohen is looking so much better this morning. His color is better and he has only had Tylenol since 6 a.m. His oxygen sats are still struggling a bit but he is definitely improving.

We even got a little smile and kiss from him this morning. Looks like we will be staying at least another night but hope that home is in our Saturday "forecast".


I will update later in the day with any changes. Thank you for your thoughts and prayers=)
Posted by Christin at 10:17 AM 2 comments:

All I can say is how in the world did we handle 120 + days of the hospital before and when Cohen was born????? We are only halfway through 1 night and I am exhausted!

Cohen had his surgery this afternoon (Thursday). He had his heel cords clipped, adenoids removed and a broncoscopy. I know I have said before but we have been putting off this surgery for over a year. I just didnt think his little lungs were strong enough. After having a relatively healthy winter we scheduled it.

I know hindsight is always 20/20, but this is crazy. Here I sit in the PICU watching him struggle and work so hard to breathe after surgery. I can't believe he is here again. Helpless is such a mild word for how hard this is to watch.

I know he really needed this surgery to be able to walk. Everyone keeps saying in the long run we will be glad. I hope that is all true. The orthopedic surgeon also had to clip the cords on his big toe once he go into the surgery. Other than that is was exactly as planned.

The ENT surgeon came to see us after and said Cohen did great. He also told us Cohen's airway has gown tremendously in a year since the G tube surgery. GREAT NEWS. We were on cloud nine! That lasted about until they called us to recovery!

About an hour after he talked to us they let us come back to recovery. A nurse was holding him when we got there and she told us he had been a "handful". I was not pleased with the comment, but it turns out, she wasnt really our nurse, and ours came back from her lunch then. I held him and his oxygen saturations kept dropping. He just could not get comfortable but was not awake. The nurse called the Anesestologist and he came to check. He did a chest x-ray and gave meds. Cohen rapidly got worse. They ended up bagging him about 3 times. It was scary but thankfully they let us stay in the room.

This doctor and about 4 others, along with several nurses worked on him for about 2 hours. They never left his side. I have to say it was absolutley amazing care. When they finally got him stable they decided we would spend the night in ICU. It took until 11 pm to get him moved. Then more doctors and nurses checking and looking at him.

They think his lungs are just more scarred and weaker than we thought. That he has "reactive airway disease" and this caused his airway to swell up from being intubated. These are all just theories and guesses for now.

I am leaving out many details, but I am tired and cant think clearly. He is stable now but still requring alot of oxygen and is getting pain meds to help him rest. He is still really fussy and crying alot even with them.

Thank you all for your texts, calls, and prayers! Love you all! I left my cell phone charger at home, and my phone is completely dead. We really hope this is just a quick, temporary thing and we will go home in a day or so. I will update tomorrow. Goodnight!
Posted by Christin at 12:53 AM 1 comment:

48 hours until Cohen's surgery. I can't believe it is already here. I am nervous and ready to have it behind us all in the same thought.

They will clip both heel cords, do a broncoscopy scope and remove his adenoids. Sounds like a lot but I think it is all very needed. Please say a little prayer for him=)

We have been busy with fun summertime activities since school ended. Cohen is more fun everyday and is such a little ham. Everyone says I never put a pic of myself so here is a recent one of me and my sweet Cohen.

Thank you for all you love and support. I will update you asap after surgery. 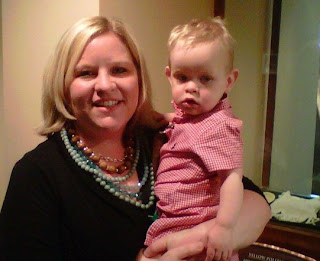