Big Blue is BACK!

We hauled Cohen to Vandy yesterday for an Orthopedic check-up. I knew the new AFO (foot brace) he has been wearing was not doing the job. I have not been happy with it, to say the least.

It is by far the most expensive shoe in our house and also the most annoying. Cohen works his little foot until it comes off about 10 times a day. The doctor agreed with me it's not doing what it should be, and he decided to do a few more rounds of casting.

I have mixed feelings about this-----I hate that he has to wear this big, huge cast. I am sad he can't get in the bathtub, which is his favorite thing in the world. However, I want to get this fixed and done with! In my mind he's better off to have a cast now, than later when he wants to walk and run around.

From the beginning, the doctors have thought his issues with his feet were due to my water breaking so early. Now, the Ortho doctor thinks it may be a true club foot, but just a mild case. I am not sure what to think.

Regardless, the solution for the foot is the same, no matter what the "official " cause.

Here is sweet Cohen this morning and his old friend "Big Blue". 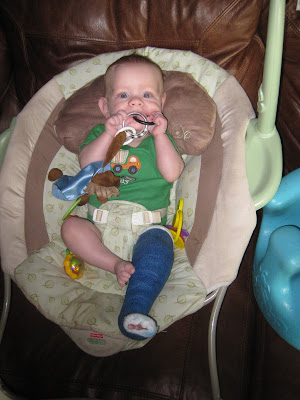